Every little thing is gonna be all right

Crappy economy got you down?  Dreading another awful Connecticut winter?  Sick of that ugly hole in the ground?
Cheer up - Ziggy Marley's tour bus made a stop here in Stamford!  Ziggy has some tour dates in Massachusetts, Pennsylvania, and Ridgefield, so I guess he heard how cool The City That Works is and decided to check it out! 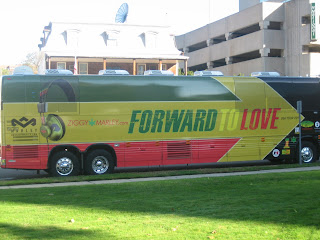 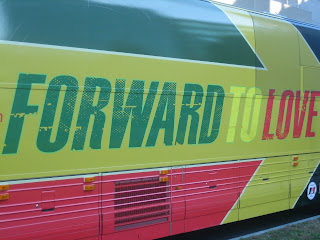 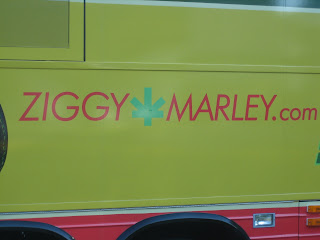 Posted by Streets of Stamford at 9:11 PM No comments:

As the Occupy Wall Street movement grows to Los Angeles, Fresno, Houston, Dallas, Baltimore, Boston, and more, and even goes global, it was only a matter of time before it took hold in Connecticut, specifically in the insurance capitol of the world.  That's right, it's Occupy Hartford!  In solidarity with our fellow Nutmeggers, I propose an offshoot movement: Occupy Stamford!
What's the mission of Occupy Stamford?  Is it to bring accountability and decency to the finance industry?  Eh, too much work.  To demand a faster rollout of our new M-8 train cars?  Not really.  To teach people in Stamford how to use their turn signals?  No, but that would be nice.  The mission of Occupy Stamford is to shame Milstein Properties into selling our city's worst eyesore, The Hole!!  These absentee owners have let that huge lot sit for 14 years without making even a half-hearted attempt to develop or sell it (in their defense, they're just continuing the tradition of neglect passed down from all the previous landowners).  Every time someone offers them their asking price, they raise the price.  Nice!
Fortunately, our friends over at 888 Washington Boulevard may have found a way to finally end this nightmare.  According to this Angela Carella column from June, "They found a way in the 1968 contract between the URC and the previous owner, a subsidiary of Stamford developer F.D. Rich.  The contract provision says the URC has the right to buy the parcel from a mortgage holder who does not develop it by paying the mortgage debt.  The URC is working on calculating a price using a formula in the contract. It would be substantially less than what the Milsteins could get on the open market, Goldberg said."
I'm not a fan of governments seizing private property except for public purposes like roads or railroads, and the whole Pfizer debacle in New London brought my blood to a boil, but this is different.  It's a clear case of  purposeful and never-ending neglect.  As much as I'm also not a fan of the urban renewal projects of the 1960s, this was clearly not the intention of Stamford's attempt at renewal.  The purpose was for developers to buy the land and then, oh, I don't know, DEVELOP IT - not sit on it for decades.
I hope that the URC goes through with this plan.  Heck, they could probably put out a call asking for citizens to contribute whatever they can to pay the mortgage debt on The Hole.  It would be a great rallying cry and could really bring the city together for a common cause.
Until then, Occupy Stamford will continue to complain loudly about The Hole!  What, did you really think I was going to suggest camping out in a public park?  Have you ever camped out in the Northeast in the fall or winter??  It's cold outside!
Posted by Streets of Stamford at 12:18 PM 8 comments:

Diwali, chili, and burgers...oh my!

Diwali is the Hindu festival of lights, and it's a very cool holiday.  This year's Diwali will fall around October 24th, and I'd like to join in the fun!  Does anybody know of a Diwali celebration in Stamford?
In other news, there might not be too many Hindus at UUSIS' fourth annual chili cook-off on October 15th.  Because some of the chilis will be made with beef.  Which many Hindus don't eat.  And some chilis will probably have pork in them, so there go the Muslims and Jews.  Heck, will I be the only person at the cook-off??  Based on the crowds for the previous events, I doubt it.  Anyway, the cook-off will take place next Saturday from 12-3 at the Unitarian Universalist Society in Stamford, 20 Forest Street (across from the Avon).  Admission is $10, or $5 if you bring a bag of non-perishable food to donate.
Now if you're still hungry after next year's chili cook-off, you'll be able to hit up Five Guys Burgers & Fries!!  We missed out on getting a Whole Foods, BSF has locations in the towns on either side of us, and Shake Shack set up shop in Westport, we're getting a Five Guys, dagnabbit!!  The only thing that could make me happier would be an In & Out.  Mmm...double-double with cheese...
Posted by Streets of Stamford at 8:48 PM 3 comments:

My favorite cheese/smoked salmon/seafood/olive oil joint, Fairway, is having a Shopping Night on Wednesday, October 5th, from 4-9 PM, to benefit St. Luke's LifeWorks.  A whopping 25% of all registered sales will go to St. Luke's, so load up!

St. Luke's LifeWorks is the largest provider of services to the homeless in Lower Fairfield County, and Fairway has "successfully provided training for homeless individuals in areas such as culinary arts, customer service, and effective workplace communications; has employed dozens of clients."

Eat amazing food and help people at the same time.  Awesome.
Posted by Streets of Stamford at 11:33 AM 1 comment: