Awesome stuff to do in June

Happy first day of summer!  It's 97 degrees!  I love the heat - I'll take it any day over a snowstorm.

It won't be 97 degrees this Saturday for the Beautiful Morocco Festival in Mill River Park!  This colorful extravaganza will feature music, food, henna tattoos, fashion, and, best of all, camel rides!

Next Saturday, check out the opening of Franklin Street Works' newest exhibition, "These Transitional Spaces."  The show "asks us to enter other times and places through a combination of what an artwork suggests and our psychological and visual responses to those images and objects."

And now for some awesome news: The Most Expensive 9 American Cities.  Spoiler alert: We're number six.
Posted by Streets of Stamford at 12:43 PM No comments:

And the winner of the Fairway Fire Fighters Food Face-Off is...

Yesterday, I had the privilege of not only attending Fairway's Second Annual Fire Fighters Food Face-Off, but actually judging the competition!  Not a bad gig, I must say!

The three fire departments vying for the grand prize of a $500 Fairway gift card were Noroton Heights, Cos Cob Fire Police Patrol (which sounds like an awesome Chuck Norris movie), and Stamford's own hometown heroes from the Belltown Fire Department.

Also up for grabs was this giant trophy featuring a miniature chef and three miniature firefighters! 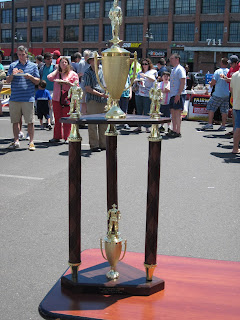 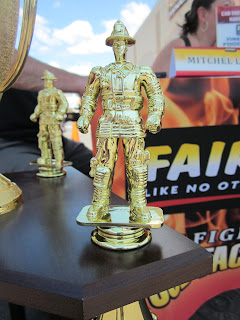 My fellow judges were Jodi Helman from jodi's kitchen and home, Mike McGowan from WEBE 108, and Fairway's own Mitchel London.

The three dishes were burgers, ribs, and vegetable skewers...but there was a secret ingredient each team had to incorporate into the burgers - poblano peppers!  Poblanos are pretty mild peppers, but then again, I eat habaneros whole.  Good thing Noroton Heights brought their truck! 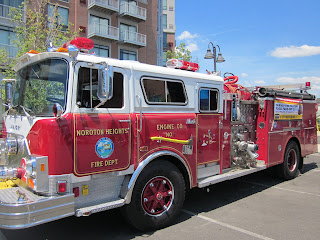 Here are some warm-up shots before the real action begins: 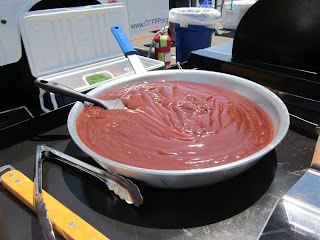 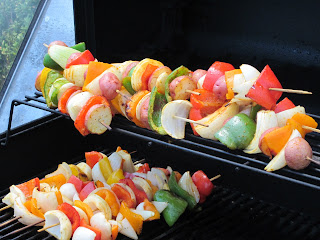 I had veggies, so by definition, it was a healthy meal. 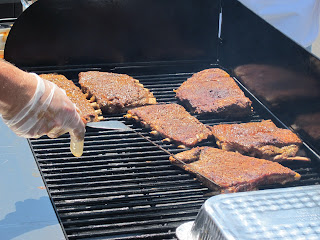 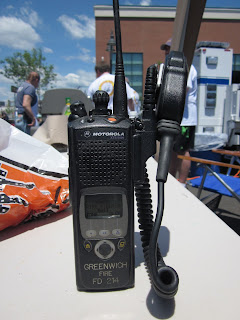 I guess firefighters are never truly off duty, and thank goodness for that. 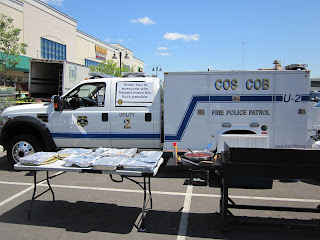 I can definitely see Chuck Norris and his Fire Police Patrol driving
one of these through the front door of the bad guys' hideout.

Now onto the food!

First up were the burgers.  I should add that each item was only identified by the team number, so we were judging blind.

Team 2 brought it strong right off the bat.  This bad boy had gorgonzola cheese, onions, roasted poblanos, and a honey-mustard-ish sauce, with some hot chips on the side.  The meat was perfectly cooked - hot and juicy. 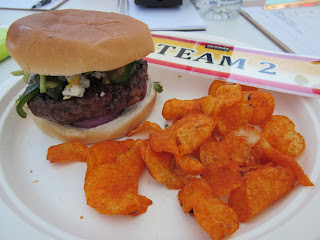 Team 3's burger had BBQ sauce, chopped poblanos, and something that I thought tasted like thousand island dressing (the main ingredient in McDonald's secret sauce).  The meat was also very nicely cooked. 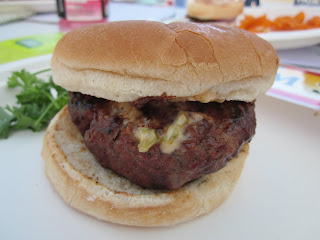 The food was coming at us fast and furious, so I forgot to take a picture of Team 1's burgers.  That's right - burgers.  They kind of misunderstood the contest and gave each of us two halves of different burgers.  One had cheese, roasted poblanos and a slice of ham!  It was pretty tasty, but the ham was a little odd and distracting.  The other one had bacon and cheddar in it.  Need I say more?

Next up was our meat intermission: the veggie skewers. 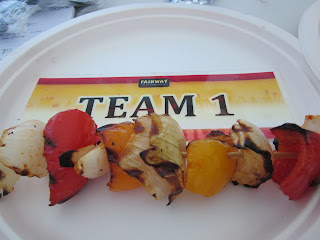 All three skewers were pretty similar.  In all fairness, there aren't that many vegetables that will hold up on the grill, but each skewer had a little yummy twist.

My winning skewer: Team 2, I think.

And now for the main event...the ribs!!

Not pictured: Team 1's ribs, and that's a shame because they were really darn good.  Remind me to fire my photographer.

Team 2's ribs were next. 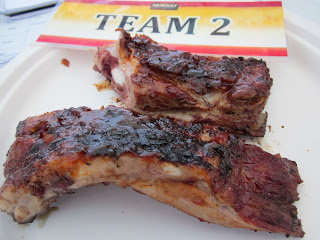 To be honest, they were kind of tough.  The meat didn't come off the bone that easily, and the sauce was just decent.

Finally, Team 3's ribs.  Feast your eyes on this! 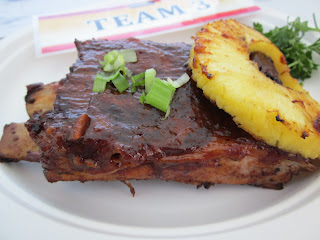 Scallions, pineapple, a nice, dark glaze...yeah, these were my winning ribs.  The sauce had a subtle sweetness and just a little bit of kick.  I also correctly picked out a hint of beer!  The chef is Canadian, so I hope it was Labatt's. 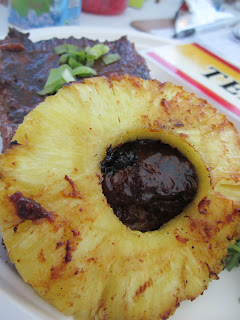 So...the moment you've all been waiting for... 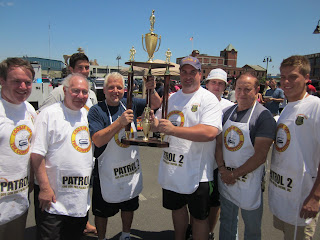 In addition to their humongous trophy, they won a $500 Fairway gift card, and the charity of their choice will get a Fairway shopping night, where the charity receives a portion of the sales from that night.

Perfect weather...good times...good food.  I hope I'm lucky enough to be invited back next year!  The only thing that could top this year's competition would be ribs made by Chuck Norris' Fire Police Patrol.  I've heard that Chuck Norris doesn't use rubs or spices - he roundhouse kicks the flavor onto his ribs.
Posted by Streets of Stamford at 10:39 PM 2 comments:

Are you a person who eats?  Do you like good food?  If you answered yes to both of these questions, then cancel all your plans for Saturday and go to the Second Annual Fairway Firefighters Food Face-Off!  This year's competition features firefighters from Noroton Heights Fire Department, Cos Cob Fire Police Patrol and Stamford Volunteer Fire Department cooking up their tastiest ribs, beef burgers and vegetable skewers.  There will be free samples, giveaways, and music!  The festivities begin at noon.

After that, take your private helicopter, jetpack, or teleporter to Serendipity Magazine's "Horsing Around for Charity" event at the Greenwich Polo Club.  There'll be food, music, wine, microbrews, and activities for the kids.  The proceeds from the event will support Pegasus Therapeutic Riding, a non-profit that provides equine-assisted activities and therapies to children and adults with physical, cognitive, and emotional disabilities.

Once you've had your fill of ribs, beer, and horses, head downtown to check out the newest addition to Bedford Street: Hudson Grille!  I don't know anything about this place yet, so let's all camp out like we're waiting for Twilight tickets Kathy Griffin the next iPhone! 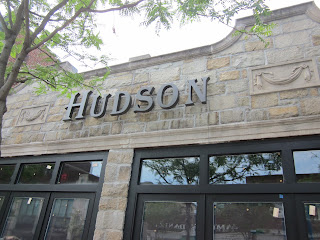 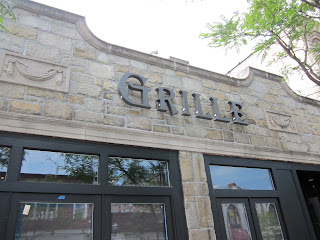 Posted by Streets of Stamford at 2:08 PM No comments: