Are you kidding me, Glenview House?

Glenview House is one of the new "mixed-use" developments currently going up on the East Side at the corner of East Main Street and Glenbrook Road. 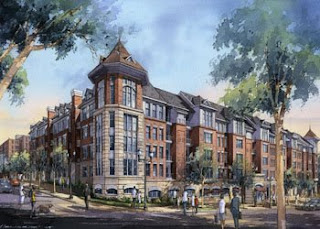 The original website for the development had no information on what rents would be for the various apartments, so out of curiosity, I emailed the general info address. Three weeks later I got a response. Here are some highlights:

"At Glenview House, we showcase brand new, modern one, two and three bedroom apartment homes with and without lofts. Our extremely spacious apartments are detailed with 9ft ceilings, in-apartment storage spaces, crown molding, walk-in closets and patios or balconies. Add in granite countertop, kitchen center island with modern appliances and hardwood floors, full size washer and dryers, central heat and A/C to ensure you are getting an apartment you are delighted to call home. You will also have use of our three tier garden courtyard including a seasonal resort style heated swimming pool with sun deck, billiards room, plus a 24 hr state of the art fitness center!"

$2250 for 824 square feet??? That's a lot of money for views of an Auto Zone, a Taco Bell and Bev Max! I love the Colombian food at Mi Terruño, but this area is not exactly "luxurious." And I don't mean any offense to our friends on the East Side, but who in that area can afford to pay $2800 for a two-bedroom apartment??

I support improving neighborhoods, but this project and its counterpart, East Side Commons, seem to embody the worst aspects of gentrification. That is, of course, if anybody is actually willing to pay that much to live in an area that still needs work.

Posted by Streets of Stamford at 8:47 PM

I can't figure this project out either. At best, you have easy access to Stamford's fine day workers. But it's a condo, so what do you need to hire them for.

As an East Sider, I take no offense. Those are premium prices in an area of town that isn't known for being a premium neighborhood.

If they're successful, those new residents could have a profound impact on the development of East Main St.

Are they going to have their 10% affordable units onsite, I wonder? Mill River House did.

And I wonder how many parking spots they ended up deciding to do. MRH had more than the required number.

I'd imagine all of East Ave will start to turn over now. Glenview and The Commons are the first step. I noticed the run down houses across the street from the Commons building are for sale, I bet a developer will grab them. There's another residential building going in on the other side of the tracks at 914 East Main. It's part of a plan to create an "urban village" outside of the downtown.

If the planned train station goes in, it could end up being a pretty cool and convenient place to live.

Mr. Z and JT: The East Side has definitely been neglected for too long, but (and maybe I'm just too much of a people person) I don't understand why improving a neighborhood has to mean pricing out its current occupants.

In that vein, I also don't understand why every new project in town has to be "luxury." What happened to building a nice, average apartment building?? My wife and I used to live at 65 Prospect Street. It's just a nice apartment building at a reasonable price (at least at first).

I guess I just don't see how you do it any other way. As a builder, how is it possible (let alone desirable) to build new buildings and then offer rental or purchase prices that are equivalent to the rundown buildings that dot the existing landscape?

The existing residents of the East Side can choose to improve their own situations, and maybe they'll feel an incentive to do so now that they see that there are others (namely the Commons and Glenside developments) that have shown their faith in the neighborhood by investing huge sums of money to improve the area.

I just don't think it's possible to improve an area without this type of transformation. If it was possible for the current residents to improve their lot on their own, why haven't they taken steps to do so?

Mr. Z: I know developers have to upgrade rather "same-grade," and these buildings are definitely an improvement over used-car lots, but it still kinda sucks that it's pretty much a case of "OK, poor folks, move on out so the richies can move in."

That said, I also don't get why, like you said, the homeowners and landlords can't keep their places looking nice. I understand that money may be an issue, but would it kill some people to, I don't know, mow their lawns??

I also call them to see the prices and I think they are a little Crazy. I mean 200 0 and around for a 1 bdr is too much. .. Yes the buildings are cute and apparently would be a great place to live .. but they are really expensive. It might be chaper to rent outside stamford and buy a smaller car just for the trip to work.. I mean 2000 and something for just 1 room.. carzy

You are an idiot. You have no idea what you are talking about. I live there and its great. If more people like me moved in there, the world would be a better place.

Wow, I don't think it was necessary to call me an idiot. If you read the post again, you'll see that I didn't say anything about Glenview House itself; my comments were about how expensive it is for what you get and where.

If more people like you move in there, that's one more reason for me not to.

This is a great place to live and really not that expensive for what you get. Are you complaining about it just because you can't afford it?

Apartment envy? Hardly. But for the money, I'd rather live downtown.

Horrible place to live...Been here for a year. Multiple breaks-ins/thefts in the parking garage, poor management company and an even worse developer. All they care about is making their money. STAY AWAY!