Day one of the Porkpocalypse began like any other.  It was hot.  I was hungry.  Luckily for me, it was also the day of the Fairway Firefighters Food Face-Off, so I went to Fairway to judge some burgers, kabobs, and ribs!

Belltown, Cos Cob, Noroton Heights, and Westport were all in the house, cooking up some deliciousness.  But first, here are some appetizer pictures: 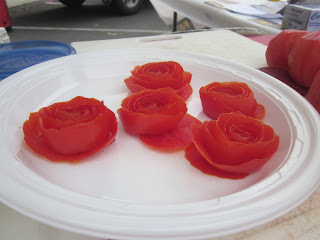 Lovely flowers made from tomatoes... 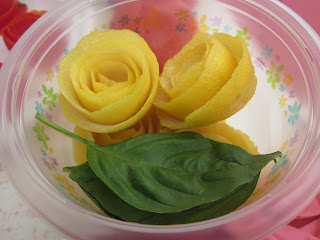 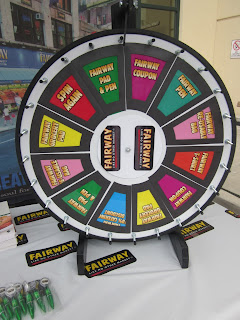 Fairway's version of the Wheel of Fish. 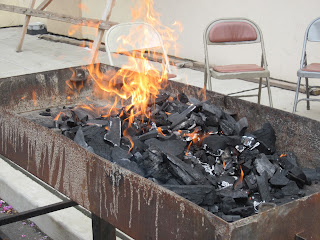 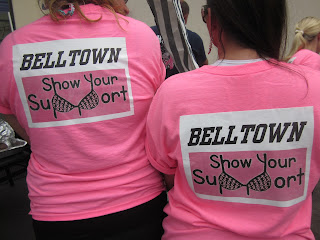 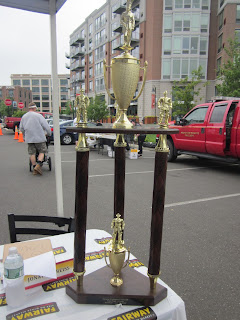 The hardware.  This trophy is huge. 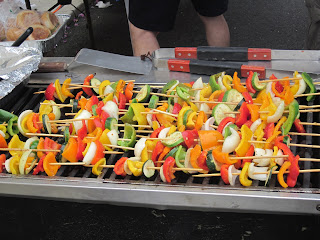 Speaking of food, the first course was burgers - into which the competitors had to incorporate the surprise secret ingredient: chorizo!  In no particular order, the four burgers we tried were:
- blue cheese and chopped chorizo
- cheddar and sliced chorizo
- guacamole and chorizo
- pineapple, onion, and chorizo sauce

They were all delicious, with the guacamole burger being my favorite.  I should add that I'm a huge guacamole fan.  Put some guacamole on a copy of War and Peace and I'd probably eat it.

Oh yeah, I was too busy eating to remember to take pictures of the burgers, plus burgers tend not to look as good in pictures as they taste.


Next up were the kabobs. They could either be chicken or veggie kabobs, though some of the teams mixed things up and did both.  They were all very good, with one WOW.  Again, no pictures...too busy eating.

And now for our main event: ribs!  With pictures this time! 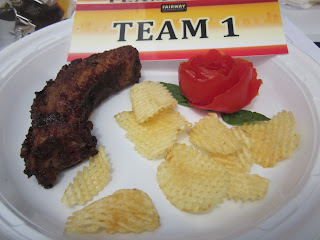 How much for just one rib? 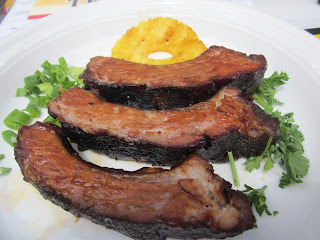 This beautiful trifecta was the consensus favorite among all the judges.  One of the chefs told us the secret: they cooked them at 200° for TEN HOURS!  He said he got up at 2 a.m. to turn them.  Now that's dedication!

For your intermission entertainment...The American Bombshells! 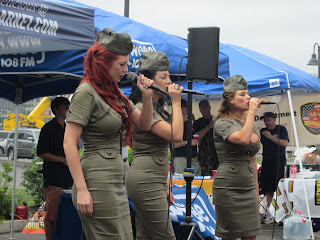 And this year's winner of the Fairway Firefighters Food Face-off is...COS COB!  Back-to-baby back champions! 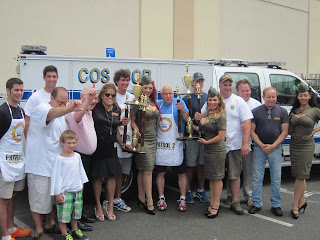 In addition to another huge trophy, Cos Cob's bravest won a $500 Fairway gift card and a charity shopping night, where a charity of their choosing will receive 25% of Fairway's profits that night.

So...having survived day one of the Porkpocalypse, I retired to my shelter to await the challenge of another day.

I'd been looking forward to Pork in the Park for MONTHS.  Delicious BBQ in the newly revitalized Mill River Park...what's not to love?  Well, a lot.  I'll be honest; I was disappointed with PITP.

My biggest issue is that you had to pay to get in, and then you had to pay for food.  It was good food - Bar Q, crepes from Volta, Fryborg, Hot off the Grille, and more - but I could try them any other time without a cover charge.

There was also a BBQ contest, with the winner being crowned the Connecticut BBQ champion, but the contestants were only cooking for the judges.  I've been to chili contests where you pay an entrance fee and then get to taste all the chilies, and I kind of thought PITP would be more like that.  So I paid $10 to watch people cook BBQ?  Kind of a bummer.

Don't get me wrong - it wasn't all bad.  There were games for the kids, good live music, and hot sauce vendors (I bought some ghost pepper sauce - oh yeah), but I hope they can put together a better experience for next year's festival.

Well, I made it through the Porkpocalypse - stuffed, a little sunburned, but otherwise unscathed.  I look forward to what the future holds in this bacon- and sauce-covered new world we've created.  Only the strongest can survive.  So eat up, my friends.  Eat up.

PS: Speaking of chili contests, they had one at SoNo Marketplace back in April.  I started writing about it but then got sidetracked, so look for a few catch-up posts soon!
Posted by Streets of Stamford at 2:44 PM

You got hosed, JR. You paid to get in and watch people cook BBQ. We went on Saturday and got to pay and watch them...prep and sleep on cots. So far, this Mill River Park has been a bit of a bust.

Just curious but where have you been able to see six live bands play for 8 hours for $10?