I want my Stinky Stmfrd!

After enjoying some delicious fondue a few weeks ago at The Blue Pearl in New Haven, I had the pleasure the following weekend of visiting Stinky Bklyn, the famous cheese shop in Brooklyn. This, of course, got me to thinking, "Stamford is a pretty affluent place. Why don't we have a cheese shop?" 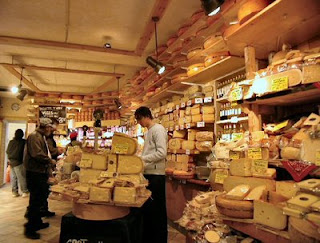 Why don't we have a cheese shop? Is it because Stamforders are not across-the-board wealthy like Greenwichites? Does the lower-income end of our population deter gourmet eateries and stores? This also feeds into my Blandford argument. Are we too jaded for gourmet food and unique stores? Too urban? Too white-bread?

Sigh...it seems like every time I go somewhere cool or see something unique, I wistfully imagine having that same experience here at home. That said, if any venture capitalists would like to hire a food lover with no business management experience to run a cheese shop in Stamford, drop me a line!
Posted by Streets of Stamford at 4:02 PM

Cheese shop! Can't we first work on getting a halfway decent independent coffee shop? Not that cheese wouldn't be nice...but hey, coffee is a requirement.

Agreed! I've been using Whole Foods to get my good cheese, so this reminds me again how sad I am that the Whole Foods in Stamford idea didn't turn out. An independent cheese shop is almost too much to ask for!

There is a wonderful one in New Haven called Caseus.

I remember when I moved here about 23 years ago that we had a wonderful cheese shop in the fashion plaza on High Ridge Rd. Does anyone else remember it or am I crazy?

Anon...right on! Every single reasonable (NOT STARBUCKS) has never made it. Even the fun Italian style delis seem to disappear (I know about Esposito's, but it just opened in March). And all we get for a big box store is a Target where you have to pay for parking!This is a crazy mixed up town where only the very young want to get very drunk can play and enjoy themselves!

Why are people in this town so afraid of independent joints? We're doing OK on the non-chain food front (as long as you like a lot of Italian), but you'd think we're in some Midwestern nightmare where the only dining choices in town are Applebee's, Friday's and Chili's, and everybody buys everything at Wal-Mart.

I remember the cheese shop up High Ridge, too (back when the Friendly's that was there hadn't yet been remodeled, had counter seating, and had $0.99 kids meals).

I think it's more a symptom of the high rents demanded at the commercial locations. I have no idea what the profit margin on cheese is, but while plenty of people would love a shop like that, would enough people go, on a regular basis, to warrant the owner keeping it open?

In these economic times, people are more likely to save their cheese-buying-dollar for Costco or something similar.

Does Fairway have a good cheese dept.?

I'm far from an expert on commercial real estate, and I understand that this is an expensive city, but what the heck is going on when a landlord would rather have empty storefronts than fill them for slightly less money?

I read a story in the Village Voice (I think) about the revitalization of SoHo in the 90s. One of the developers met with a bunch of local landlords in the area and convinced them to lower their rents by 10% in order to attract some different, unique businesses. What an idea! Sure, they could've aimed high and brought in another friggin' Gap or DKNY store, but I'm glad they had the desire and willingness to help create an interesting neighborhood.

I wish some of the developers and landlords in this area had that kind of gumption. Yeah, they might not be sacrificing some immediate profit, but if they help a desirable store establish themselves, that'll help guarantee future income.

Does anybody know who I should contact to pitch this kind of crazy plan? DSSD?

I have never seen a city with so much against independents. If they manage to build it, we do not go and before they even try we put as many obstacles in the way. I love the idea of mixed use buildings, low to moderately priced condos with store front first floors, but even that has given way to chains. Look at Bedford street and how little support the independents get from anyone!

There's a great cheese shop in Darien in the Goodwives plaza. You know, where the original Stepford Wives was filmed, along with a Cannonball Run movie or two.

Rumor has it there's also a decent one in Pound Ridge, per Chowhound.

When I went off to college in the 80s, I would tell people about my hometown and one of the highlights was "not drowning in chain stores." How much has changed!

Anyway, yes, I do miss that great cheese shop on High Ridge Road. The one in Goodwives is small but very good, and worth the trip. The staff knows their stuff.

This is such a weird town. Aside from Target and Burlington, we don't have the Connecticut Avenue big box stores; there was even an outcry when Home Depot tried to put a store on West Main Street and when the Harbor Point plans called for a bunch of them. However, we don't have a thriving independent environment either. With the high rents, car culture, and bland tastes, it must be hard for any small business to grab a foothold in the CTW.

The landlords won't play ball here. That is one of the reasons that only chains can make it here. They just won't compromise to help the small business person. That said, the people of Stamford are also at fault because they don't patronize the independents enough.

Chefbabe: I don't get it. Why would a landlord rather have an empty storefront - FOR SEVERAL YEARS - than negotiate with potential tenants? Isn't it better to make 80% of your original asking price than none of it?

The landlord for that empty strip on Bedford Street has been holding out for "high-end" retail, but he needs to realize that he can't compete with Greenwich Avenue or Main Street in Westport, so why not go for "unique" retail? He might not make his $1000/sq. ft. (just to make up a number), but he'll help give the city some sorely-needed character and hipness. He'll still make money in the end, but slightly less.

To whom would I suggest some type of rent compromise program? Downtown Special Services District? We don't need another bank or CVS in town.