As I was leaving Harbor Plaza after work today, I saw a helicopter landing nearby. Strangely, it touched down in Kosciuszko Park, right across the canal from my office complex, rather than at the heliport in the harbor. 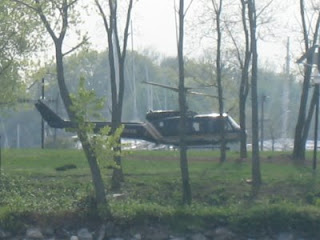 After looking more closely at the pictures, it's a rescue helicopter. The pilot kept the rotor turning while several people got out of the helicopter and walked over to some cars waiting nearby.

The cars had white flashing lights in their grilles; I'm not sure what law enforcement or rescue sector would have those. The pilot of the helicopter talked with two men on the left, while a firefighter stood behind the black car.

After a few minutes, the pilot and two men walked back to the helicopter... 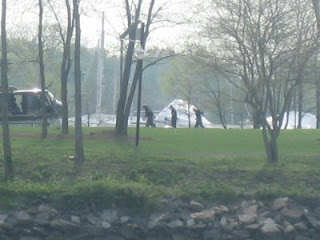 ...and got back in, though I'm not sure if they let someone off, picked someone up or neither. 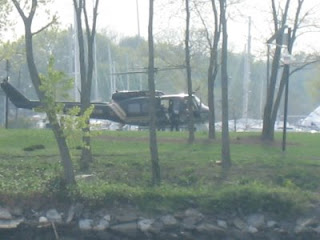 The helicopter then took off, circled past one of the office buildings, and headed north towards downtown.

I'm curious as to what this was all about. Does anybody have a police scanner or a contact in the fire department?

Follow-up 5/8/09: We know now that the helicopter was in town for the police parade and not to transport UFO crash evidence to Area 51. It's still odd that it would land in the middle of a public park with people jogging by when there's a heliport in the vicinity.
Posted by Streets of Stamford at 6:20 PM

This may have been related to the big police parade downtown today at 6:30 pm. I guess some police & vehicles came in from outside the city to participate.

Yeah, I agree with Silli. This was most likely related to Stamford's annual parade in honor of National Police Week.

Representatives from all over the area turn out, it is quite a show of force.

Great if you're one of those folks that loves the Pipe and Drum Corps.

It was the Fairfield Police helicopter, and yes it was there for the Police Parade.

I heard that it actually touched down twice. I was hoping it was the A-Team, since I have a problem and no one else can help.

Jack Bauer has obviously tracked Tony Almeida's cell signal to the harbor. I just hope Jack can retrieve the canister before he succumbs to bioweapon exposure.

He'll be safe from airborne toxins as long as he avoids Magee Avenue in the summer!

Nobody has a police scanner any more since the City of Stamford decided to digitally encrypt all of their transmissions. This is pretty uncommon and a handful of other cities who went encrypted have worked out arrangements to at least let the media listen in so they can do their jobs, but not Stamford. Yet.

(You can still listen to FD, though)

Anyway, they frequently use the park for an LZ. The state police chopper has landed there for official business as well.

The hospital has their own LZ, I think. I think there are only two spots in town where you can land, but I'm not sure.