I reinvented Stamford, and all I got was this notepad

Along with JT from BlogStamford, I checked out the latest event in the Reinventing Stamford series Monday night at the Marriott.

It was less structured than the previous event I attended, since it was shared between DSSD and Reinventing Stamford. The DSSD portion was basically a roast of Mayor Malloy, but without the jokes. Or any actual, you know, roasting. It was a retrospective on his relationship with DSSD, covering the progress made downtown since he took office in 1995. The Mayor then gave a presentation highlighting the changes in business, retail, housing, culture, etc., during his tenure.

But the best part of the whole shindig was the SWAG!! At the first event, I got this neat Reinventing Stamford notepad. 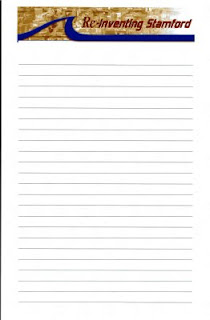 Last night, I got (below, from the top) a guide to this summer's Art in Public Places exhibit, a Stamford Downtown Summer 2009 brochure and the DSSD 2008-2009 annual report. 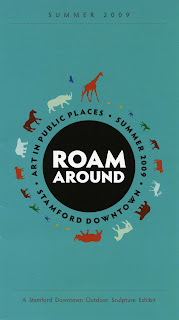 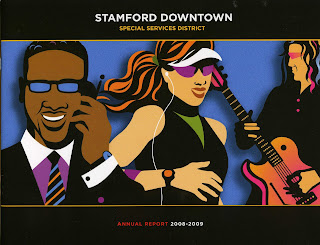 The best thing of all, though, was my new i-Shop card!

This bad boy gets you 10% off at participating stores downtown! Sweet!

In all honesty, I'm kind of torn about this card. On the one hand, I'm all for saving money...but on the other hand, I'm also all for supporting local businesses, and I know how slim the profit margins can be for a small business. What should I do???

The angel on one shoulder says, "Don't feel bad; these businesses would rather get 90% of their purchase price than 0%!" The devil on the other shoulder says, "You need to save your money so you can afford to live in this freakin' town and keep patronizing these businesses! Stop being such a whiner and use the card!!" The devil on the devil's shoulder then chimes in: "If I don't get 10% off at Beamer's, who cares?"
Posted by Streets of Stamford at 8:41 PM

lets see, 10% minus the 33% the give the maf, opps I mean the town center owners means they don't come away with much of anything, Throw it away!

So frugal, yet so thought. You should run for Finance Board.

Did the meeting seem to have a point aside from rehashing the past 15 years?

Whitemist: What?? You think the other downtown stores pay off the Town Center?

There wasn't much else to the meeting besides dinner.

Poems in Search of Pictures said...

So I tried twice to use the lil' card, and no love from Stamford merchants so far. Kona Grill says you can't use it for booze. Mary Ann's on Summer says it hasn't gone into effect yet. Well...I suppose you get what you pay for in a free card.

we need a LVT. Hole in the ground and other spots need to be addressed...

From what I've read about LVT, it sounds like a good idea, but it could never happen. The powerful landowners would practically riot in the streets.

LVT stands for land value tax. I'm no expert, but it's basically a tax on the land, not on the buildings erected on it. It encourages development so that you can reap some return on the investment you're paying (in the form of taxes).

Here's a key paragraph that applies to Stamford's craters:

Proponents allege that the necessity to pay the tax encourages landowners to develop vacant and under-used land properly or to make way for others who will. The claim is that because LVT deters speculative land holding, dilapidated inner-city areas are returned to productive use, reducing the pressure to build on green-field sites and so reducing urban sprawl.[7] For example Harrisburg, Pennsylvania in the United States has taxed land at a rate six times that on improvements since 1975, and this policy has been credited by its long time mayor, Stephen R. Reed with reducing the number of vacant structures in downtown Harrisburg from about 4,200 in 1982 to less than 500. LVT is an ecotax because it ostensibly discourages the waste of locations, which are a finite natural resource.

thanks. sounds sensible. if a LVT was initiated, what would be the conseqeunces? what could the so called powerful land-owners do to retaliate?

Like I said, I'm not an expert on this, so here are some relevant points from the Wikipedia article:

If labor, buildings or machinery and plants are taxed, people are dissuaded from constructive and beneficial activities, and enterprise and efficiency are penalized due to the excess burden of taxation. This does not apply to LVT, which is payable regardless of whether or how well the land is actually used, because the supply of land is inelastic, market land rents depend on what tenants are prepared to pay rather than on the expenses of landlords, and so LVT cannot be passed on to tenants. The only alleged direct effect of LVT on prices is to lower the market price of land.

Proponents allege that the necessity to pay the tax encourages landowners to develop vacant and under-used land properly or to make way for others who will. The claim is that because LVT deters speculative land holding, dilapidated inner-city areas are returned to productive use, reducing the pressure to build on green-field sites and so reducing urban sprawl.

The most important parts are the necessity to pay the tax encourages landowners to develop vacant and under-used land properly or to make way for others who will and LVT deters speculative land holding, both of which are detriments to development in Stamford.

I forgot to address your question about retaliation. I don't think the landowners would necessarily retaliate, but I'm sure they're content just sitting on their vacant properties and enjoying the tax write-offs. In other words, they wouldn't want anybody to rock their boat, even if it resulted in higher property values due to the development and improvements that would potentially take place.

My obvious next question is what is preventing this from happening?

You mentioned that "this could never happen" in an earlier post.

Seems like a no-brainer to me if we are talking about implementing something which is in the best interests of Stamford. Apologies if I am missing soemthing very obvious!

I don't know if it's ever been proposed or seriously considered by the city or the state. It might be one of those ideas, like a flat income tax, that makes sense, but is deemed too crazy or cumbersome to work. If you're really interested, I'd suggest contacting the mayor's office or the city board of reps.

As for what might keep something beneficial from being implemented, my guess would be that it's the same things that have kept fuel efficiency at 1960s levels for four decades: money and politics.